The Energy that Heals Part II: Biophoton Emissions and the Body of Light 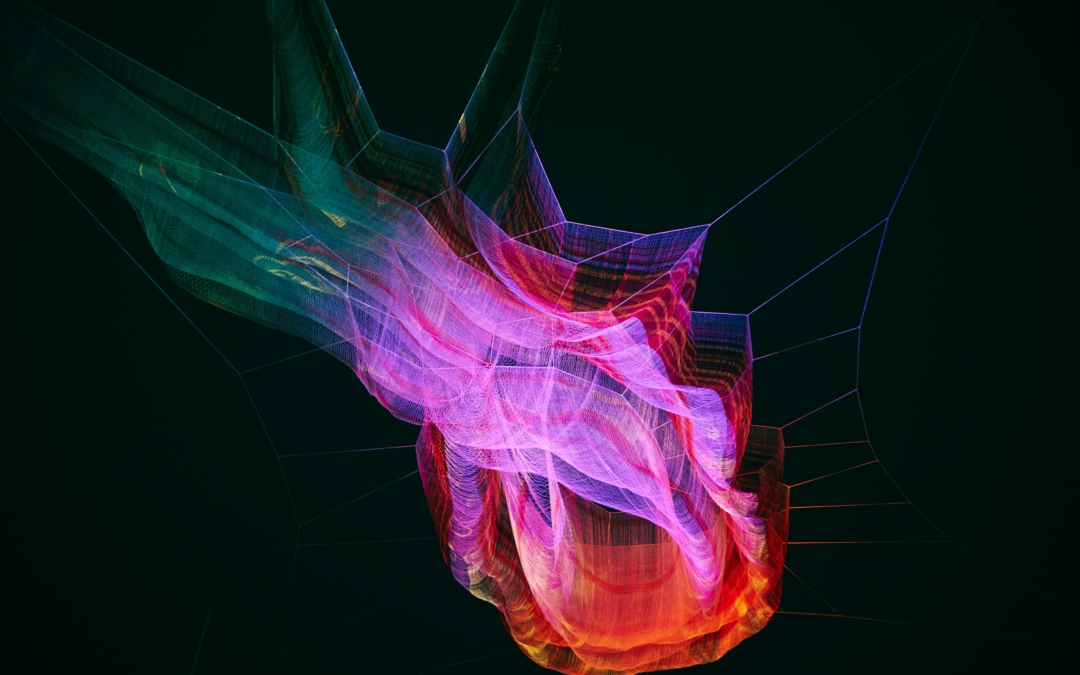 A few weeks ago, we looked at a Brief History of Healing and Regeneration with Electric and Magnetic Fields, Part I.

We saw that the use of electric currents and magnetic fields for healing dates back to ancient times, and that the information-based viewpoint emerging in modern bioelectromagnetics has striking parallels with Tibetan, Jain and Vedic medical traditions, where concepts of energy and information are fundamental in health and healing.

Here, we’ll take a look at a fascinating aspect of bioelectromagnetics: biophoton emissions, which are the spectrum of light emitted naturally by all living things.

The Science of Biological Light

Much weaker than the bioluminescence found in fireflies and many marine animals, biophoton emissions occur over a very broad range of frequencies, spanning the infrared, visible, and ultraviolet ranges1,2.

These “ultraweak” biophoton emissions are too faint to see with the naked eye, even in complete darkness, but can be detected with modern equipment and have been increasingly studied in recent years2.

Ultra weak biophoton emissions, most commonly produced during oxidative metabolic or stress processes in the body, have been suggested as non-invasive low-cost diagnostic and testing methods in agriculture, food chemistry and biomedicine2.

This ‘body of light’ has been shown to reflect a variety of different states of health and disease, and for example, Fritz-Albert Popp observed in 2009 that as living cells become more crowded in a cell culture dish, cancer cells exhibit increased biophoton emissions, while normal cells do not3.

A systematic review from John Ives and colleagues on the diagnostic use of biophotons concluded that the peer reviewed literature is “surprisingly large,” with the majority of studies of “good to high” quality4.

The authors recommended that randomized controlled clinical trials should be performed to determine if biophoton techniques could be used for non-invasively evaluating the specific inflammatory state of the individual and providing a general measure of overall health4. 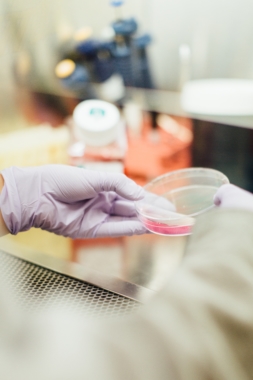 A growing body of research suggests that ultra-weak biophoton emissions can also play roles in how cells and tissues in the body grow, repair and divide.

The first report in 1923 of ultraviolet (UV) light emission during cell division in onion roots was from Alexander Gurwitsch5, who subsequently found that UV light could stimulate cell division, and posited the existence of “mitogenic rays” governing basic processes of growth and repair6.

The early observations of Gurwitsch were further developed in the 1980s and 1990s by Fritz-Albert Popp and L.V. Beloussov, who elucidated many of the basic properties of ultra-weak biophoton emissions6,7.

Since that time, biophotons have been reported to be involved in a variety of biological functions8, including secretion of regulatory neurotransmitters9, respiratory activity in white blood cells10, seed germination11, yeast growth12,13, algae growth14, and interactions between fish eggs and embryos15.

While it may not be surprising that biophoton emissions reflect biochemical activity, there is increasing evidence that light itself plays a role in how the cells in our bodies communicate with one another16.

Two seminal studies from Gunther Albrecht-Buehler in the Proceedings of the National Academy of Sciences USA17,18 reported long-range interactions between cells due to infrared light, concluding that

“The results suggest that near-infrared light scattering by the cells mediate a long-range attraction between them, which does not require physical contact and enables them to detect each other’s presence.”18

And a remarkable study by Daniel Fels in 2009 reported that cells can influence one another using non-molecular signals, most probably photons19.

Fels looked at interactions between two groups of single-celled organisms (paramecium caudatum) chemically isolated from each other in clear containers.

In a series of experiments, Fels reported that information regulating cell division and energy uptake passed through a quartz window between the cells, but was blocked by one made of glass.

Since quartz easily transmits UV light, whereas glass does not, Fels suggested that the long-range effect was mediated by photons in the UV range.

Since 2009, Fels has continued with this research, in 2016 reporting interactions between two different species of microorganisms, Paramecium caudatum, and Euglena viridis20,21.

Fels also conducted experiments in which the groups of microorganisms were shielded from each other against electromagnetic fields (EMFs) in the optical spectrum. He found that some effects were blocked by EMF shielding, suggesting that an electromagnetic interaction was involved.

Biophotons and the Body of Light 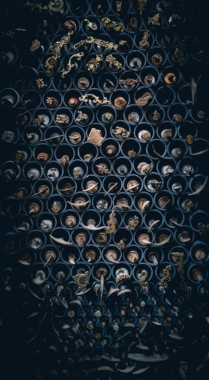 These modern observations of ultra-weak biophoton emissions are reminiscent of ancient concepts where the gross physical body and mind are connected through a ‘body of light,’ an intermediate subtle body that is described in energetic terms22.

For example, the Jain concept of the kärman sarir, describes a subtle body that surrounds the soul, interacting with consciousness emanating from the soul (Figure 1).

Adhyavasāya are described as 2 types: psychical and physiological.

These adhyavasāya are thought to be energetic in nature and are described in a manner that bears a strong resemblance to modern descriptions of electromagnetic fields22.

Ancient viewpoints such as these are reflected in an emerging biofield paradigm describing a complex dynamic informational field essential to all life23.

This shift from a purely mechanical, chemistry-based viewpoint to an information-based view is reflected in advances in closely-related fields that once seemed disconnected: biophysics, biology, psychology, and the developing fields of mind-body research such as psychoneuroimmunology and psychosocial genomics23.

These results have helped substantially to form a foundation for an expanded integrative medical model and hold promise for a better understanding of health, healing, and better science of life23. 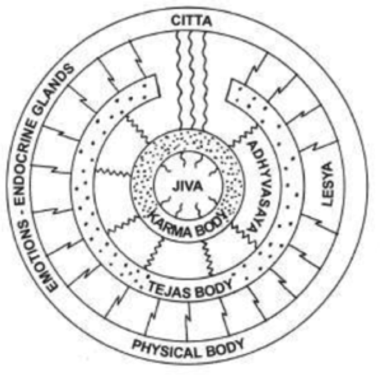 Figure 1. Simplistic description of Jain theories regarding the relationship between the embodied soul (jiva), consciousness (citta), and the interaction of consciousness with the subtle bodies (karma body, tejas body, physical body): Jains describe the rays of consciousness from the soul as interacting with the karma body to give rise to subtle vibrations (adhyvasaya) that influence the makeup and dynamics of the fiery (tejas) body and thus impact physical and emotional functioning. The interaction of adhyvasaya with the fiery body also gives rise to organized biofields of information that relay one’s psychospiritual state (lesya). Image source: http://www.jainworld.com/jainbooks/karma/ch8.aspu 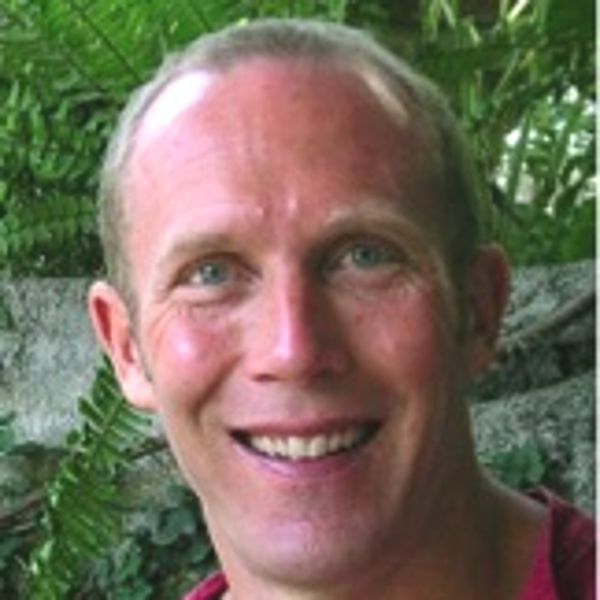 David Muehsam, CHI Director of Technology Innovation, is a biophysicist with research focus on the biophysical bases of EMF bioeffects and therapeutics, the biophysical bases of yoga, meditation and mind-body therapies, and the connections between the Arts and Sciences. Dr. Muehsam holds a BA in Physics from Hampshire College, and PhD in Neurophysiology from the University of Bologna, and has authored on biophysical mechanisms of EMF bioeffects, EMF therapeutics, mathematical modeling of EMF bioeffects, and complementary and alternative medicine. Dr. Muehsam is Senior Biophyscist at VID Art Science, National Institute of Biosystems and Biostructures, Italy, and is also a yoga/meditation teacher and an accomplished musician, performing on flute and saxophone since childhood.